What is the meaning of the text written on Minato’s Kunai?

Minato Namikaze was one of the strongest and fastest supporting characters in the Narutoverse and the father of the main character Naruto Uzumaki. He was the Fourth Hokage of the Hidden Leaf Village and was known as Yellow Flash for his well-known speed.

He always used to carry a custom-made Kunai, known as Flying Thunder God Kunai, which differed from normal Kunai because of its hefty weight and three blades. Minato’s Kunai had a special seal on them that allowed Minato to perform his special technique: Flying Thunder God Technique, which could teleport him at his will while fighting with enemies.

But Naruto fans have always wondered about the meaning of the text written on Flying Thunder God Kunai, but they got no success in finding it. So we are here to help you understand it in simple words:

The Meaning Of Minato’s Teleportation Kunai?

The Japanese or Kanji text on Shinobi’s teleportation Kunai can be interpreted as “Sword of Shinobi’s Love”. It is close to the actual meaning of the text, though the exact meaning of the line is not clear since the sketcher did not pay much attention to clarifying the characters.

Now we know the meaning of the text written on Minato’s Kunai, so let us see further. Why did Minato use custom-made Kunai instead of a normal Kunai?

Why Does Minato Use His Custom Made Kunai Rather Than A Regular Kunai?

He scattered his Kunai as markings around the battlefield before the attack and then teleported to those markings to beat his enemies by surprise, making him faster than other 4th Raikage. Minato used the same Kunai to transport the Tailed Beast Bomb sent by Kurama during the Kyuubi attack when Naruto was born. 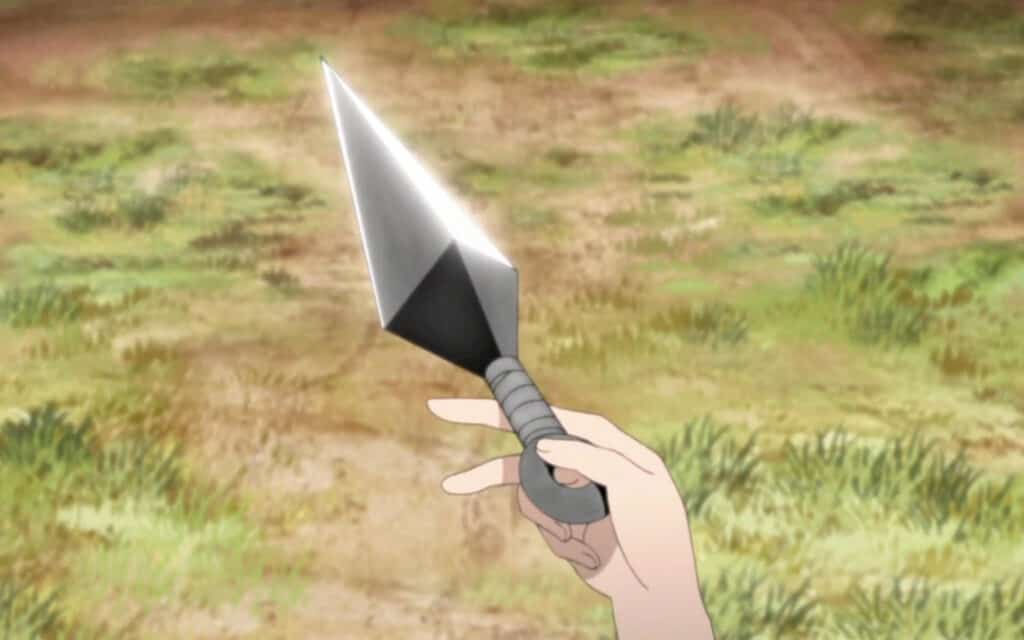 The idea behind the design of Flying Thunder God Kunai was to create a thumb hole to hold it easily. With this ability, Minato became the fastest ninja on foot. One more advantage of its three-blade design was that it could easily break the opponent’s sword by twisting it when it got stuck in one of the blades of the Kunai.

One of its excellent uses came to the fore when Minato fought with Obito, the masked man. He threw his Kunai on Obito, and when it was just above Obito’s back, Minato teleported to him and smacked him using the Rasengan.

Minato also gave one of his Kunai to Kakashi when he became the Jōnin and told him that he would teleport to the location of his team whenever needed.

Now let us see, What was the strongest Jutsu or Flying Thunder God Jutsu that Minato used?

The Flying Thunder God Jutsu was a space-time Ninjutsu created by The Second Hokage, Tobirama Senju, and used by the fourth Hokage, Minato Namikaze. It gave the user the ability to teleport to the location, where they had placed their markings using their Kunai. However, some people confuse it with the high-speed movement of the Body of Flicker Jutsu. It is not so because it is the immediate space-time-movement teleportation similar to the Summoning Technique.

The technique worked when the user placed his marked Kunai on any physical surface and sometimes the opponent himself. Then the user entered a dimensional hole that immediately transported them to the marked location. The user could teleport anything – they were holding, was in contact with, or linked to their chakra. But to move large objects, additional chakras were required. They could also choose to teleport objects without teleporting themselves. The Flying Thunder God technique could be used as a defensive option, as they can teleport away from an opponent’s onslaught.

With this technique, Minato became deadly. As a result of his stunning reflexes, Minato could teleport a short distance to avoid enemy attacks while counterattacking.

Another notable ability that Minato could accomplish with this technique was to blend it with a Shadow Clone to vanish all his enemies in a single stroke. He could also create a split through the seals that would absorb anything that came in between the two seals and teleported it elsewhere.

When Tobirama and Minato were resuscitated during the Fourth Shinobi War, they connected each others’ Flying Thunder God Kunai to teleport to each other’s sealed locations. Then they developed the Flying Thunder God Mutually Instantaneous Revolving technique to switch places among themselves in the battle to set up divergent maneuvers.

Could Minato throw his Kunai to teleport in the air to get up to space?

Could Minato Throw A Kunai, Teleport To It In The Air, And Keep Throwing It And Teleporting Up And Up To Get To Space?

Technically Yes, he could. His Flying Thunder God Kunai can instantly transport him anywhere he has placed his seal. He could do that because he always kept two marked Kunai with him, so he could throw one, then teleport to space, take it, and then repeat the same process. Realistically, he needed to be very fast to mark it ahead of time.

One issue might be that he would be unable to breathe because the air would be too thin, and he would freeze to death if he reached high enough.

When Did Kakashi First Use His Mangekyou Sharingan?