Gon and Killua first met during the Hunter exam. Gon was the son of a famous hunter and was much more skilled than those around him despite his young age. Killua, on the other hand, was the only other child at the Hunter exam. Upon spotting Gon, Killua approached him, and eventually, the two grew into fast friends because they were the only ones of the same age. Initially, their friendship did not come off as particularly special. In the final part of the exam, when Killua was paired to fight against his elder brother Illumi, we saw Killua as vulnerable and dropping his cool guy facade. It was the first instance when we saw that side of Killua and that he was a super sheltered kid with a suffocatingly overbearing family. All he wanted was to become friends with Gon. After admitting defeat to his brother, Killua decided to return to his family’s mansion. When Gon heard about this, he was not convinced about Killua returning to his family out of his free will and decided to bring Killua back. Accompanied by some friends, Gon went to the Zoldyck mansion, and after several tests of endurance and pain, managed to get Killua back. From that point onwards, not only did Gon become Killua’s hero and savior, but the bond between them also solidified.

Did Killua Have A Crush On Gon In Hunter X Hunter?

There could be no objective answer to this question because it all depends on the viewers’ perceptions. In this section, I will try to present you with some facts besides my opinion to let you decide which side you are on if, at all, you have to. Although there is little or no canonical love from either Killua or Gon towards the other, they conceivably had something more than friendship. Some call it romantic love, while others platonic or brotherly love. They loved each other past the line of friendship, and I feel it was like an innocent crush and respect and admiration for each other.

Since childhood, Killua was deprived of the experience of having friends. When he met Canary, a guardian of the Zoldyck estate, and wished to be friends with her, she disciplined herself to prevent herself from having any personal feelings for her employers. Fast-forward to the Hunter Exam, Killua met Gon and quickly discovered that he wanted a friendly relationship with him. Before analyzing Killua’s feelings and behavior towards Gon, it is imperative to understand that Killua did not know how to behave around friends because he had never had such a relationship before Gon. He did not want to push Gon away. Even in a seemingly simple relationship as a friendship, Killua did not know how to manage his feelings. Moreover, Killua was raised under abusive conditions, so he reacted to situations differently -like he got jealous when Gon went out on a date and felt embarrassed when he received a compliment. Resultantly, Killua shared a strong best-friend relationship with Gon and felt a personal need to protect Gon, which made him seem possessive and might have appeared romantic at times.

Talking about Gon, it did not seem that he had had a crush on Killua but liked him as a close friend and enjoyed spending time with him. When at the campfire with Killua, he told him, “I think it’s fun to be with you”. Gon decided to stick with Killua, not Leorio, not Kurapika, not one of the other hunters he just met in the Hunters exam. It was not out of pity but because he liked him and had a genuine interest to be with him.

Of course, love does not always count to romantic love, and sometimes it transcends those boundaries. The same goes for the love between Gon and Killua. Their bond was so strong, and they admired each other to the point where love might appear as a weak word to describe it. I feel that they could be easily classified as soulmates as not only did they have a formidable bond, but their characters also grew when they were together.

Nevertheless, some scenes in Hunter x Hunter strongly hinted at a romantic angle between Killua and Gon, especially from the former’s side. 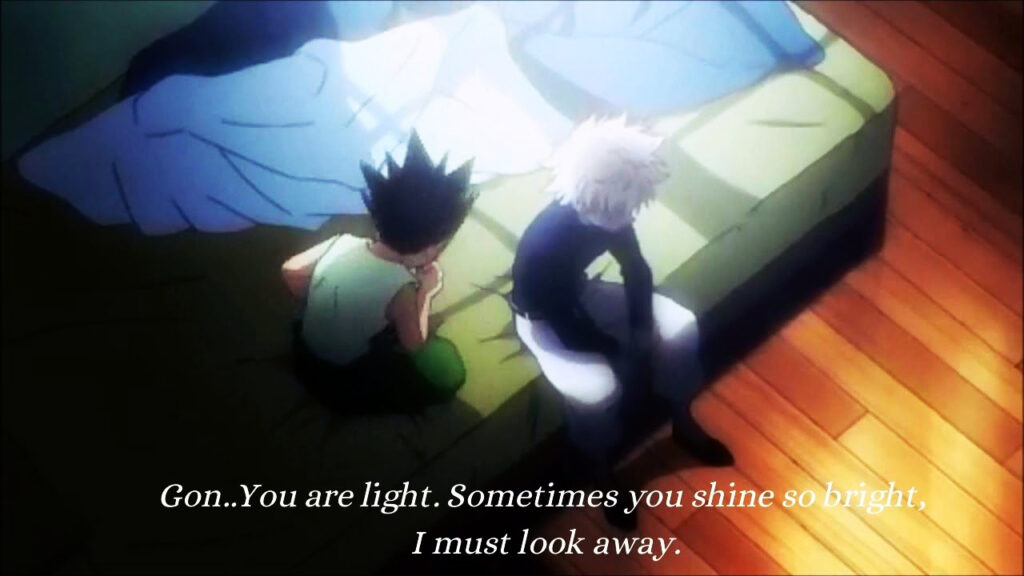 Some of the moments or reoccurring ideas that indicate this in the series:

Moreover, Gon mentioned multiple times how he wanted to travel the world with Killua and always teased him. Certainly, Killua had a greater connection to Gon than most people have with their best friends. So while I think it is important to recognize that there is no canonical love at play, their relationship was designed in such a way to make us ask this kind of question. Their relationship is far from simple, and that is probably one of the things that makes it so compelling.

Who Is Gon’s Real Mother In Hunter X Hunter?